Initial impressions of Budapest are of a larger, more sprawling city than Prague. Svetlana had warned us, whereas in Prague it is feasible to walk from a point of interest to the next quite comfortably, Budapest’s sights are spread too far apart and if you intend filling your time as profitably as possible, you have to resort to the public transport system. Fortunately, it’s excellent. A decent tram network and the Metro system offer comprehensive coverage. They are regular and efficient with day passes and other inexpensive options, even if some of the trains are interesting for their incredible age and last century build. 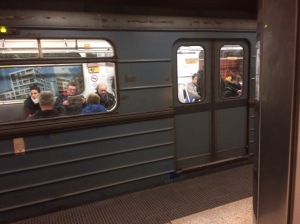 Hotel and Metro
Our hotel was on a main road, three lanes in each direction with tramlines in the middle. Our room being at the back this didn’t disturb us but, the traffic seemed absolutely manic, haring at full tilt from one red light to brake sharply for the next. The driving certainly seems more “enthusiastic” here.
The metro station like the run down area it served, was bleak and full of rough sleepers. Svetlana had prepared us for the crumbling buildings when she mentioned we weren’t staying in the best part of Budapest but, our experience found that whilst having many fine, strong, potentially impressive and attractive edifices, excepting the magnificent parliament buildings and several others on the banks of the Danube,

the buildings everywhere were in need of restoration. Too many have boarded up windows and graffiti is  a problem. Nothing more creative than basic tagging, there is no argument to defend against its being simply ugly vandalism. It contributed to the streets’ air of sadness and poverty which in turn was compounded by the proliferation of rough sleepers in every metro station.

The Museum of Terror
Our first port of call was the House of Terror Museum. This tells the story of both the Nazi and Communist occupations of Hungary. Situated in the building used by the secret police of both these regimes, it is not for the faint-hearted. The outside walls are lined with photographs of some of the thousands tortured and executed in the cells preserved in the basement. It is a very sombre and fitting tribute to the lives of so many, often very young people who should never be forgotten. The cells are small, cold and claustrophobic, the gallows and torture rooms, absolutely terrifying.

Svetlana had recommended we pay for an English commentary but as you proceed, each room has handouts in several languages and there are videos playing with English subtitles. It is hard to concentrate on the commentary in your ear whilst trying to follow the videos and I would recommend simply taking the hand outs for reading later. The interviews and accounts by those that lived through the barbarity are truly upsetting and when you remember, the last Soviet soldier only left in 1991, this is recent history. You get the impression the country is still trying to emerge from the fear and depression of those times, and the crumbling state of the buildings becomes more understandable.

We left the museum with a sense of disgust and sadness at the inhumanity but grateful to have been enlightened. We felt nothing but admiration for those brave souls who fought and resisted. Reading the ages of many of them whilst queuing round the building awaiting entry is horrifying; so many, so young. Everyone should visit this museum to understand and hopefully dispel any complacency that could exist. In this case history must not be allowed to happen again.

It was getting on for lunchtime, which conveniently decided our next port of call. “You must visit the Ruin Pubs,” everyone had said. We chose the Szimpla Kert. The ruin pubs seem to be a positive solution and reaction to a lack of money. The buildings are ramshackle but if you haven’t the funds to restore them, celebrate what is there. The consequence is a crazily colourful amalgamation of make do. Use whatever you have, old furniture be it from office or home, flowerpots for lampshades, graffiti for decoration, oil drums to rest your drink on. We would call it shabby chic but it goes way beyond our interpretation of the concept. It’s fun and quirky and in these surroundings the graffiti makes a positive contribution and has its own beauty, even if there is the odd crude message from Bob of Wigan.

The Invisible Exhibition
Determined to cram as much as possible into our time, we headed for the Invisible Exhibition. This intrigued us as it involves taking part in activities including eating a meal in total darkness. The intention is to experience what it is like to be blind and to appreciate the problems blind people live with. A warning if you are considering trying it yourself, the venue is extremely hard to find even with address, postcode and GPS. The locals do not appear to be aware of it enough to help, either. Having pounded the same streets for an hour, “it must be here somewhere,” we finally found it, only to be told they didn’t have any English speaking guides on duty that day and it was too dangerous to partake without one. Disappointed, we had to turn back, so if you’re going, phone ahead first to enquire what day a guide speaking your language will be available.

Ecseri Flea Market.
The tourist guides list this market as a significant attraction. We highlighted it as just the thing for us. Finding it was as difficult as the other places had proven to be, maybe worse because it was off the tourist map, heading out of town. We rode the metro to the end of the line then got a taxi.
As an antique market it sufficed and if you were a collector of former communist party badges or medals you would have had your choice of hundreds but, as something exceptional or worthy of inclusion in the list of the top attractions of Budapest, it fell  way short. The stock was ordinary bric-a-brac and the market itself was not even particularly extensive.
The experience helped enforce what was becoming our overall impression of Budapest; like everything else, it was what it was but nothing special. Other than the Museum of Terror nothing seemed to satisfy expectations. Perhaps it was our fault for imagining something more than could be delivered, perhaps we were guilty of comparing it to Prague when we shouldn’t have. It just seems there is potential to make the Budapest experience much better and hopefully, there will be an upturn in the economy, the shadow of the soviet times will be cast off completely and the investment will come with a little imagination to improve and develop a city that sits on one of the most beautiful rivers of the world and holds so much potential.

Food and Drink
As a final comment on this trip, the food and drink of the region is as robust and solid as the architecture. Chunks of pork knuckle, thick goulash in bowls of hollowed out bread loaves and the tripe stew is superb. Most importantly, there are plenty of restaurants serving local dishes. When I travel, I look to experience differences, learn about the culture, the language and the cuisine. Thankfully, both cities still cater for that, the Czech and Hungarian way of life is still visible in their capital cities. We were able to enjoy most of our meals at the restaurant pavement tables, despite it being the beginning of Autumn it was still warm enough, and most establishments supply outdoor heaters and blankets to wrap yourself in, or place across your legs.
Special mention to U Pinkasu, a restaurant recommended by a Czech friend. It is famous and in the middle of Prague, and everything about it was impressive the food, the service, the surroundings and atmosphere. This was our meal of the holiday; we didn’t hold back, had a starter each, main course and drinks. We expected to pay handsomely but when it came to it, the waitress didn’t understand why we proffered a card rather than cash. We in turn, didn’t really understand her confusion but outside calculating the bill, it seemed ridiculously inexpensive. We put it down to our feeble attempts at getting to grips with the currency and converting it to sterling and thought no more of it until, I received my statement a week after our return. The whole meal had cost just £21. Absolutely incredible value for money.
The street food prize has to go to Budapest. Just along the road from Szimpla Kert there are several food stalls including one which sold a hollowed cone of crusty bread filled with various flavours of sausage and garnished with your choice from, amongst other things, roasted onions, pickled cabbage, cheese sauce (very messy option).

Food and drink options, from the bizarre John Lemon range of soft drinks to the magnificent Kozel Dark, sausages galore to pork knuckle and pickled cabbage.

Overall, a trip I would recommend as thoroughly enjoyable, entertaining and enlightening.

This is Your Quest - Your Mission to Find Happiness

Jewels Of A MAGNOLIA

I AM A MAGNOLIA GROWING OUT OF BLOOD MUD~

Grab a Band-Aid & Keep on Crafting!!

Having fun is serious business

Kickin' it behind the Eight ball

A site of writings, musings, and geek culture, all under one domain!