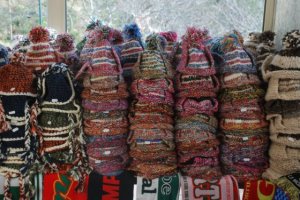 “Dribble said it was in the goatherd’s hat. There’s loads of ‘em.” Fingal bit his lip; this could get ugly.
“Why Spanish goatherd hats in Liverpool? It’s not exactly goat country.”
He began rifling the mound of woollen hats.
The shopkeeper approached the pair dismantling his display, “Need assistance gentlemen?”
Fingal exchanged looks with Crammer, “Just fancied a goatherd hat.”
“They’re Peruvian alpaca herders’ hats. The goatherd’s are there. We’ve only one…”
“I’ll take it,” blurted Crammer.

Outside, his shaking hands fumbled a tobacco pouch from inside the hat.
“Thank heavens,” sighed Fingal, “I wish Dribble would quit hiding his gear.”

Written for Friday Fictioneers – a 100 words story based on a photo prompt. Hosted by Rochelle. Read the other entries here.

This is Your Quest - Your Mission to Find Happiness

Jewels Of A MAGNOLIA

I AM A MAGNOLIA GROWING OUT OF BLOOD MUD~

Grab a Band-Aid & Keep on Crafting!!

Having fun is serious business

Kickin' it behind the Eight ball

A site of writings, musings, and geek culture, all under one domain!