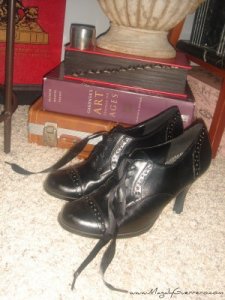 “More shoes!”
“I need them,” she says
“You’ve dozens and only two feet.”
Paul wondered how often shoes were cited in divorce proceedings.
“We can’t afford them. We’re up to here in debt.” He banged the back of his hand under his chin.
“They were cheap.”
“Cheap? Dog shit’s going for half price at the moment; shall I get a stock in?”
“Now you’re being stupid. If it distresses you, I’ll take them back.”
“The bank’s letters distress me.”
“I’ll take them back, but can I keep the clocks?”
Suddenly, Paul was aware of the loud tick-tock of time running out.

Written for Friday Fictioneers – a 100 words story based on a photo prompt. Hosted by Rochelle. Read the other entries here.

58 thoughts on “The Spendthrift”

All Things Writing and Geek, in one neat little blog!

Tracing a life through stories of death. Sometimes funny, sometimes not.

The artist ALOZADE a. search for you all images of beauties, and offer you these works and his artistic ideas

The little and large things making my life delicious!